Today, this technology is widely used across a broad spectrum of industries including aerospace & defense, most often for temperature control of various fluid systems.

The operation of a wax-filled thermostatic actuator is based on the principle that there is a significant change in the volume of paraffin wax as it goes through a phase change from liquid-to-solid; solid-to-liquid as the wax temperature increases and decreases.

The volume change is transduced into a linear, repeatable mechanical motion. Due to the non-compressible nature of the wax, this motion can also produce a significant amount of force. It has a very high-power density.

The basic elements of a thermostatic actuator include: 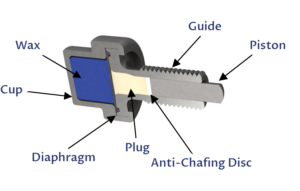 How the Technology Works

The Thermoloid® wax material that makes all of ThermOmegaTech® thermostatic valves operate is sealed inside the actuator, and as temperature increases above the melting point of the material, it expands in volume and pushes against a diaphragm, which in turn pushes on a piston. The piston acts as a valve stem, opening or closing a valve or other mechanical device. As the material cools below its melting point, its volume decreases and a spring or some other external applied force returns the piston and diaphragm to the “cold position”. The phase change, and resulting large volume change, produce motion over a narrow and highly predictable temperature range, and the temperature range at which the phase change occurs can be varied depending on the chemical composition of the Thermoloid® material that is used…

To check out the full article visit Aerospace & Defense Technology.

This website uses cookies to improve your experience while you navigate through the website. Out of these cookies, the cookies that are categorized as necessary are stored on your browser as they are essential for the working of basic functionalities of the website. We also use third-party cookies that help us analyze and understand how you use this website. These cookies will be stored in your browser only with your consent. You also have the option to opt-out of these cookies. But opting out of some of these cookies may have an effect on your browsing experience.
Necessary Always Enabled
Necessary cookies are absolutely essential for the website to function properly. This category only includes cookies that ensures basic functionalities and security features of the website. These cookies do not store any personal information.
Non-necessary
Any cookies that may not be particularly necessary for the website to function and is used specifically to collect user personal data via analytics, ads, other embedded contents are termed as non-necessary cookies. It is mandatory to procure user consent prior to running these cookies on your website.
SAVE & ACCEPT